This is my other Giant. It is the Bonegrinder Giant from Forgeworld. For my tournament list I needed two Giants. As I told before, I don’t really like the Games Workshop models. So I started looking around for alternative models and this was one of the first other models I found. 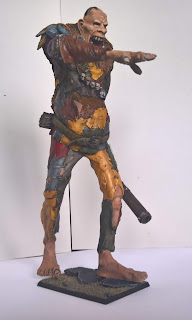 This guy is huge. Both in physical size and price. But he is a really nice model. And fit together really well. 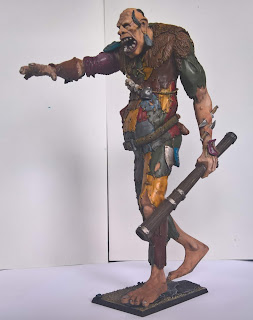 But as you can see when you compare my pictures with the ones on the Forgeworld site, the counterweight on his club is missing. The one I got was not really packaged very well and broke on the very flimsy parts on the top. As I needed the Giant for the tournament I painted him without the counterweight. 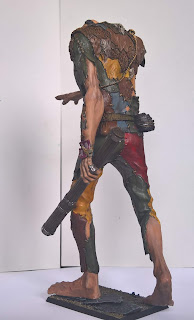 I got a spare replacement part form Forgeworld a few weeks later. Better packaged, unbroken and free of charge. Thanks Forgeworld!!! 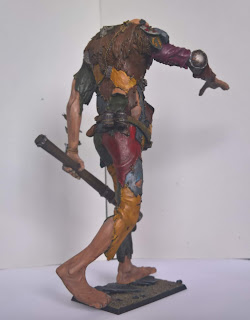 Paintingwise he was a blast. After having painted blue Ogre skin exclusively in the last month, it was a real treat to paint “human” skin – and on such a large surface. Then it was a matter of trying to fit as many leathery/clothy looking materials without repeating myself. 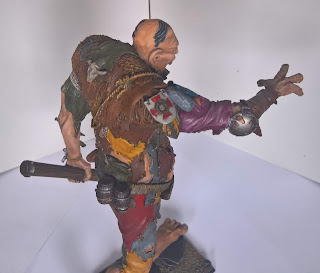 Looking at the model on the  Forgeworld site you can really change the look of the model just by changing the skin tone. I have seen ones looking really undead. Just going a bit more into the greens/greys. But I wanted mine to look more living. Even with a slightly dumb look on his face. 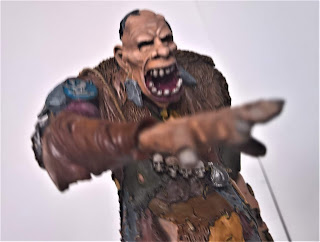 When I ordered him I did not look at all the details, but he has many shields, barrels and so on draped all around his body. That was a nice touch. I copied some of the painting schemes of my friends armies for all those shields. Him having plundered them beforehand was a new idea. 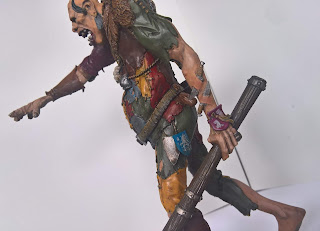