Welcome Muckegeet from Heresy Miniatures! One of the best Giant models I found out there in the internets. 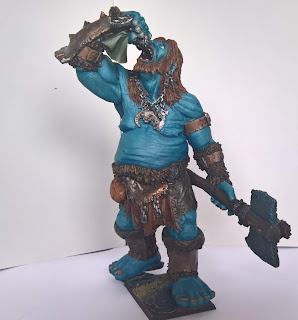 Giants in The Ninth Age are really good. At least that’s what I’m thinking. They are big, have good stats and are a single model unit. That means they can pivot as often as they like during their movement. That makes them a very mobile unit despite of their actual size. Very nimble guys. 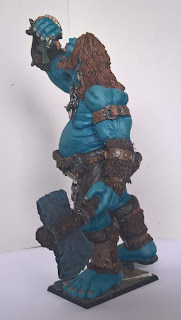 In the summer my wargaming friends always organize a small tournament. Just friends, beer, barbeque and gaming. This year I took my Ogres but wanted to field a few Giants. I don’t like the Giant model form Games Workshop. So I began looking around for alternative models. 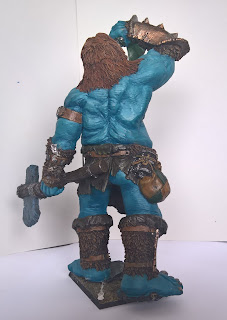 When I found Mucklegeet I was really happy. Yes he is more pricy than the Games Workshop Giant, but he is much taller. But despite of his size he is very stable. I had to mount him on a small 75x50mm base because of the Ninth Age rules (which I found out after I put him on a nice chariot base, where he fits perfectly). But the small base does not make him wobbly in any way. He just stands there like the big fat Giant he is. 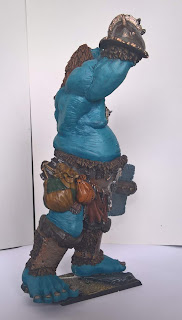 Because he belongs to my Ogre army I had to paint his skin blue. But I think it fits him very well. I painted the arm and leg bracers in stone colors first, but that did not look the way I wanted. So I went for a bronze look. Not steel as he would not be able to get that much good metal for himself. 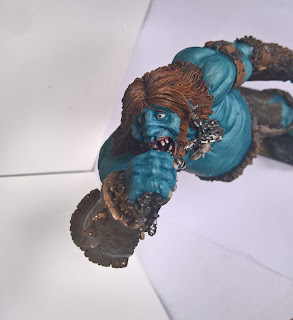 The best part is of course the knight that is being eaten by Mucklegeet. I did not manage to get a good picture of him, but the look on his face is great. 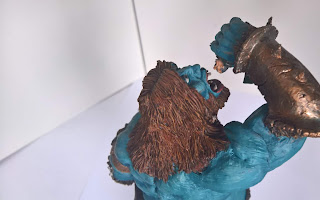 The whole miniature is great. It is made from resin and has a great quality. I did not have any bubbles and had to do very little scraping. He was very much texture on his skin, which I did not paint and highlight. 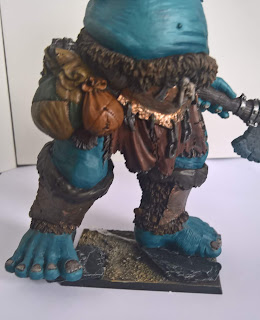 He comes in parts (I don’t remember how many – but just a few), which fit together very well. I’m not a green stuff guy, so I did not fill any holes. It was not necessary I think. Only thing that happened to me while gluing the torso to the legs was that I used to much very liquid super glue. And when I put him on his side to fixate one arm, all the glue that had not set ran out of the crack and over my fingers and table … maybe I should not have used so much glue. 🙂 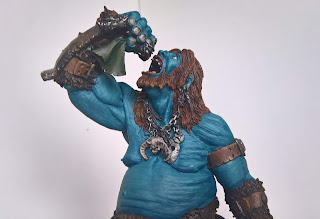