This is my Chosen Lord on a Chimera. 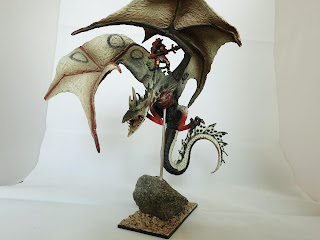 I got inspired by this image, when I was looking for a “Chaos Lord on a Dragon”.

Looking around someone said, that the great ice dragon was from McFarlane. They got a whole range of great dragon miniatures. Of course some of them are collectors items and not intended to be used for wargaming. The flying ones got a base and metal peg which acts as a flying base. 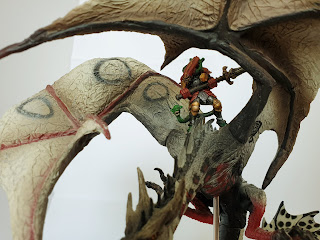 They are plastic, but it is more like the soft one from old action figures and not hard like GW plastics are. The detail on the models is ok. And they are painted. From afar they do look quite nice. If you take a closer look, you’ll see some parts not fitting together exactly. But that could be fixed by priming and painting the model completely. 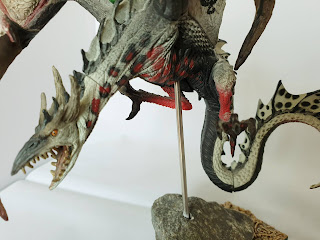 I went to eBay looking for used ones and found this one fairly cheap (around 30€). Imagining what I would pay for a model this size if it came from GW it was a bargain! I found the other dragon on eBay too. And when they both arrived this was the small one. So it became the Chimera. I really dislike the GW Chimera, so this was a great plus! 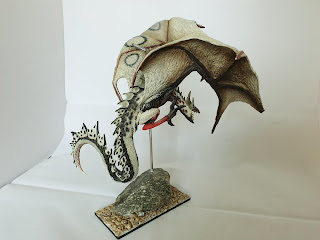 From a functional standpoint I had to build a new base for the dragon. The armybook demands a Chimera to fit on a 50x100mm base. I had to drill a hole into a fairly heavy stone and put it on one of my resin bases from tabletop-art.eu (more on the bases at a later time – they are great!). 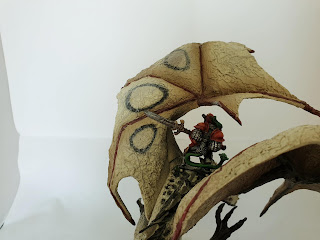 The Chosen Lord himself is an Oldhammer Chaos Champion of Khorne. It is one of the ones, where you can find painted pictures of on the Internet. I’ll go into my color scheme for the Champions/Warriors at a later date. But I kept him very khorny – red and metal. 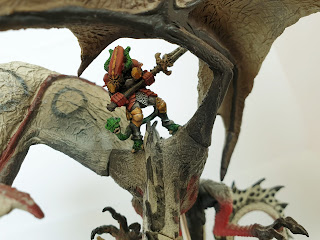 I just glued the miniature on top of the Dragon/Chimera, like he is riding it. There is not very much space on top of the dragon, so I didn’t want to add any kind of saddle to it. And the pose of the champion look dynamic enough.