Here we have the real dragon. 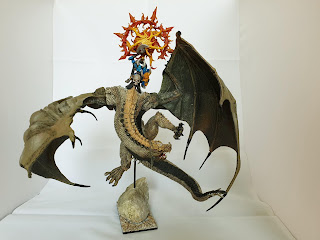 Like the Chosen Lord on a Chimera this is a McFarlane Dragon. When I bought the Chimera-Dragon on eBay I also found this baby. But this was even cheaper. I got it for 10€ because the knight, which is feeling from the dragon (which cannot be seen here, because I definitely don’t need him), got a broken-off sword. 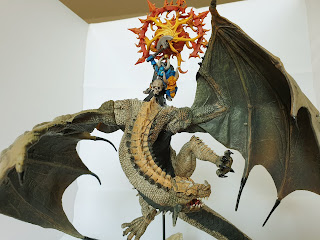 I had to get a little bit creative with this one, because he is so heavy. At first I just wanted to put a few pieces of slate on the base and attach the peg to them. But that was to complicated glueing all the stuff together in a fitting way. So I went into my garden and took a nice little heavy stone. Drilled a hole into it and voilá it fits. 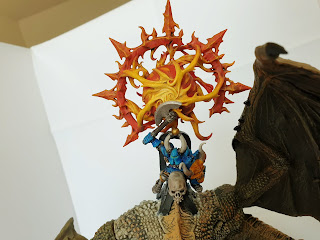 The rider is another story. My first solution was similar to the rider of the other dragon. I just took one of my Champion of Chaos miniatures and put him atop the dragon. It worked but did not look as good as the other rider. 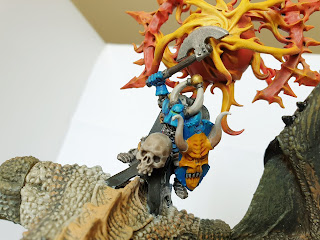 Then I remembered my bits box and took the “saddle” of the GW Carnosaur Rider, put a big skull from the GW skulls box (great one) on it and put the chaos-flame-thingie from a Slaughterbrute on top. The rider itself is a Chaos Knight from Marauder. I don’t know where I got the shield from. Just found it in my bits box. 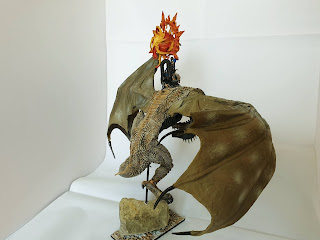 If it had not been so cheap I would not have bought this dragon. He looks nice, but McFarlane has betters ones. 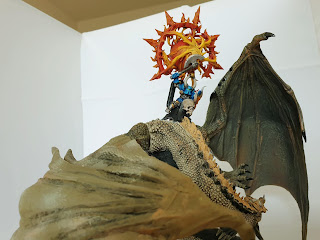 Each of the dragons has a hole, where the peg fits into. This is great, because you can remove the dragon from the base. And with his size this is much needed because he will collide with other miniatures on the battlefield. 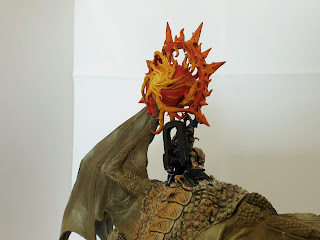