Long time no post. So what am I up to? I played a game of 9th Age at the end of last year. I tried to build a Beast Herds list. I own six Games Workshop Minotaurs (yeah the ones with the extra muscles), but I thought of fileding a bigger block. Then I remembered that I might have some old lead Minotaurs from Marauder. This lead to me going through my inventory and unearthing my old Chaos box. Upon seeing all those old miniatures I thought: “Well I could field a 3000 point Warriors of the Dark Gods army with that”. 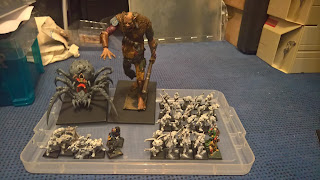 That was my first idea. The army got changed before the battle, because I realized, that 3000 points is Warband level, so I could not field three unit of Chosen. But playing with the army and having all those nice old lead models in my fingers triggered my desire to paint them up after all those years they rested in their box under my table. 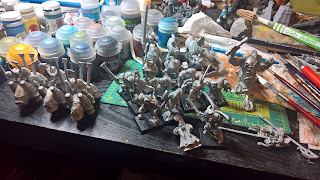 So this is the lead pile that is resting on my table right now. Let’s see what we can do with those minis. 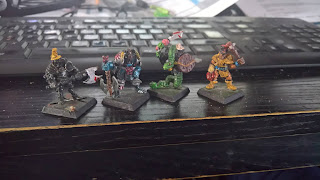 Those guys were painted about twenty years ago …. well maybe they’ll take a bath in Isoprop some time in the future 😉