Forsworn are a new kind of unit for Warriors of the Dark Gods, that are not present in the GW Chaos Warrior line. Big hulky warriors running on a 40x40mm base, these are devotees to the Dark Gods that have failed and are one step away from becoming Wretched Ones. 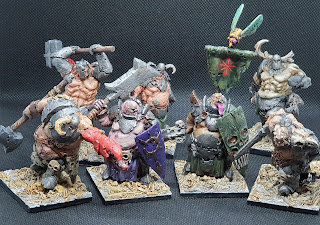 These models are Rotten Lords from Scribor Miniatures. As the name suggests, most of them look quite ill. I don’t think they got as much character as the Oldhammer Champions of Chaos. So thats why I’m doing a post with all of them in one go. 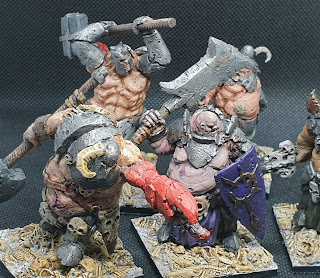 That does not imply, that I don’t like them. I think they are great and look awesome. Just a different style. Where old Citadel lead models look “clean”, these resin models look jagged and jarred. If painted sick and ill and all in bilish green, I think they would look great. 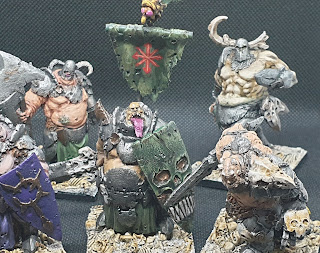 I tried to paint them like my regular warriors, with different colours – not just Nurglish greens. I mean those where once warriors – failed and got corrupted, hence their different mutations.

Most of the skin on these were done using GW Contrast Paints. With different glazes to give them a slightly different look from each other.

The models come with their own sculped bases, which look great. I used one on my Throgg the Doomlord. But for the other ones I used my normal skull bases to tie them in to the rest of the army.